These graphs report per stimulus the time course of responses across the 24 listening sessions. Some report the general patterns of responses, other show how the listener’s responses changed over successive exposures

The continuous ratings of Felt Emotional Valence and Arousal, plotted three different ways. First as individual lines with the cross listening average, then layered per session with colour marking the scale values, and finally the activity-level times series reporting the proportion of listenings showing rating changes up or down per 2 s interval.

These responses were collected to Thieving Boy by Cleo Laine from the album Wordsongs. The piece was very familiar to the listener. They had partially transcribed and practiced the piece. The heard recordings was a studio performance close to the live performance that can be heard below.

Summary of the three surface Electromyography recordings, Corrugator, Zygomaticus, and Upper Trapezius, across listenings to Stimulus 1. Plots 1, 3,  and 5 layer the sessions, reporting normalised intensity of muscle activation by colour. Plots 2, 4, and 6 report activity levels on the proportion of listenings exceeding different thresholds of activation per half second. 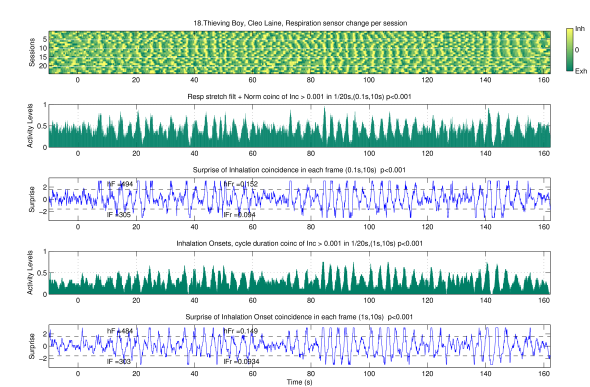 Plots of respiratory phase alignment with the stimulus, along with statistical assessments of these coincidences. 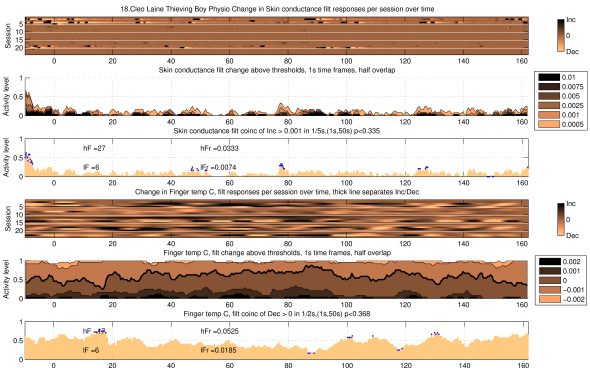